Technology changes the rules of the game, and surveying may be more in its crosshairs than the profession will admit

Maps have existed for centuries. The lines on maps indicating the boundaries of political and administrative units — cities, counties, states, and countries — are graphic representations of the limits of those entities. These lines don’t, however, typically exist in real life. There isn’t a large line between the United States and Canada stretching from the Pacific Ocean, through the Great Lakes, and onto the Atlantic Ocean.

The same goes for latitude and longitude lines on maps and globes. The public generally accepts the various delineations on maps as being somewhat accurate with an unwritten level of trust in those who have produced these maps.

trust: assured reliance on the character, ability, strength, or truth of someone or something.

Here are the guidelines surveyors use for determining surveys.

Surveyors rely on physical monuments, title documents and evidence of occupation to assist with the establishment of not just major dividing lines, but all lines of property, public or private. Finding, setting and honoring physical monuments has been a significant character trait of the surveyor for as long as maps have existed.

Monuments are placed to determine the endpoints of these lines as depicted on maps or plats, but what happens when technology introduces new ways to re-establish these lines? What will happen to our monuments when technology — more specifically those who utilize them — deems them obsolete?

The guidelines above are known as “priority of calls” or “rules of construction” by the surveying community. These items have provided the instructions for surveyors to follow in retracement of lines for many years. However, like nearly everything else in our modern world, technology has a hand in modernizing even this time-honored “surveyor’s code of retracement.”

Who would have guessed that the rotary phone dial would give way to touch-tone buttons, that the system would jump from landlines to cellular and satellite signals to remote handsets, then progress to receivers evolving away from physical buttons to touchscreens?

Technology changes the rules of the game, and surveying may be more in its crosshairs than the profession will admit.

Note that the last entry in the above guidelines for survey retracement is “coordinates.” In accordance with most accepted lists, coordinates can be local or geodetic. These coordinate values are generated by surveyors, geodesists and public agencies; they can be found on plats, and in records and websites kept by government agencies.

Now that we are more than two decades into the 21st century, it would be safe to say that most of the surveying profession uses an established geodetic coordinate system. The use of GNSS receivers is widely accepted as normal practice by many surveyors because these systems are much more user friendly than in years past. Additional constellations have added to the availability and accuracy of GNSS positional values, so utilizing state plane coordinates has become the norm.

We are now surrounded by something that has an incredible impact on our profession and the world around us. We are placing trust in a georeferenced coordinate system that cannot be identified by any of our senses, like we can with a physical monument.

A coordinate cannot be seen, touched, tasted, heard or smelled.

We are placing our full trust in a reliable position on Earth as determined by our GNSS receiver working within a published coordinate system. Because of these advancements in technology, a new generation of geospatialists is insisting we should revise the way we survey, because technology provides much higher precision and accuracy.

Just like lines on a map or plat, coordinates only exist as a calculation of a position on the face of Earth. So why is there animosity in trusting coordinates over the more traditional items on the list of retracement guidelines? It may have to do with the fact that the ground we are surveying is not in the same place it was a short time ago. Depending on where you live, it may have moved more than you think. For more information on the shifting ground we live on, let us dig into some research about our continents.

From about 300-200 million years ago (late Paleozoic Era until the very late Triassic), the continent we now know as North America was continuous with Africa, South America and Europe. They all existed as a single continent called Pangea. Pangea first began to be torn apart when a three-pronged fissure grew between Africa, South America and North America. Rifting began as magma welled up through the weakness in the crust, creating a volcanic rift zone. Volcanic eruptions spewed ash and volcanic debris across the landscape as these severed continent-sized fragments of Pangea diverged. The gash between the spreading continents gradually grew to form a new ocean basin, the Atlantic. The rift zone known as the mid-Atlantic ridge continued to provide the raw volcanic materials for the expanding ocean basin.

Meanwhile, North America was slowly pushed westward away from the rift zone. The thick continental crust that made up the new east coast collapsed into a series of down-dropped fault blocks that roughly parallel today’s coastline. At first, the hot, faulted edge of the continent was high and buoyant relative to the new ocean basin. As the edge of North America moved away from the hot rift zone, it began to cool and subside beneath the new Atlantic Ocean. This once-active divergent plate boundary became the passive, trailing edge of westward moving North America. In plate tectonic terms, the Atlantic Plain is known as a classic example of a passive continental margin.

Today, the Mesozoic and Cenozoic sedimentary rock layers that lie beneath much of the coastal plain and fringing continental shelf remain nearly horizontal. 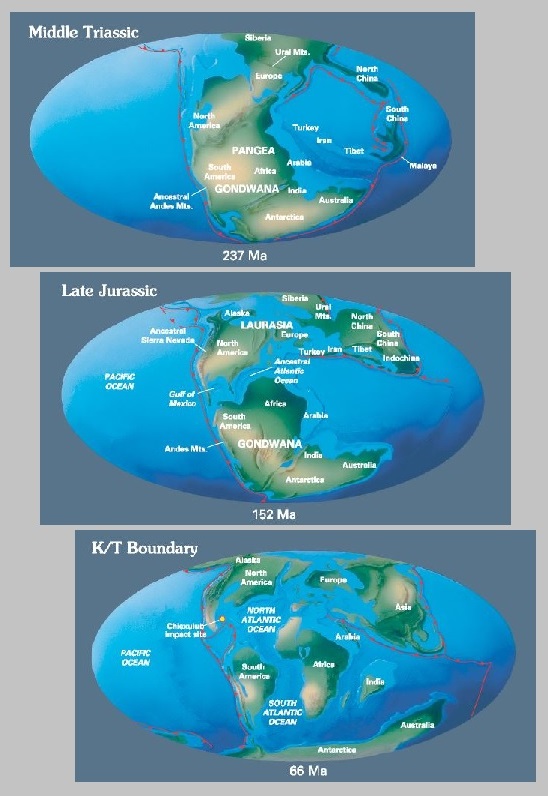 In geologic terms, a plate is a large, rigid slab of solid rock. The word tectonics comes from the Greek root “to build.” Putting these two words together, we get the term plate tectonics, which refers to how the Earth’s surface is built of plates.

The theory of plate tectonics states that the Earth’s outermost layer is fragmented into a dozen or more large and small plates that are moving relative to one another as they ride atop hotter, more mobile material. Before the advent of plate tectonics, however, some people already believed that the present-day continents were the fragmented pieces of pre-existing larger landmasses (“supercontinents”).

The diagrams below show the break-up of the supercontinent Pangaea (meaning “all lands” in Greek), which figured prominently in the theory of continental drift — the forerunner to the theory of plate tectonics.

Historians and other scientists have theorized about Pangea for centuries. Common soil types, fossils, and other evidence found on different continents help to solidify the concept of Pangea. Items discovered on the west coast of Africa have many similarities with those found on eastern South America. The physical evidence is quite convincing that an earlier supercontinent existed millions of years ago.

Thankfully, scientists gathered in the 19th century to agree upon a singular “initial meridian” that would pass through Greenwich, England, and was based upon several centuries of astronomical observations at the nearby Royal Observatory.

For approximately 100 years, mapmakers (and geodesists) used the new Prime Meridian at Greenwich as the beginning baseline for longitude determination around the world. After all, it was based upon years of astronomical observations and solved the age-old problem of where longitude starts. (Latitude was a much easier calculation for astronomers and geodesists, but that story is for another day.)

The late 20th century and the fourth industrial revolution

Technology, once again, provides us with conflicting results. While most technological advancements are game-changing improvements to mankind, they also tend to shake up information and standards that have existed for many generations. Like the previously discussed advancements in telephones, technology makes us change the way we look at things and how we go about our lives.

Mapping has become a central part of our everyday lives. Georeferenced positions for literally everything is now a standard characteristic of many functions within our environment, especially in our surveying world. Most of these improvements are due to GPS, which was originally developed for the U.S. military to guide and assist with positional location of our defense systems in relation to our enemies. We use this same precise technology to establish positional locations for boundary points, infrastructure and topographic information.

We have also used GPS to learn much about our tectonic plates and varying movement of the continents.The first thing we learned is that the Prime Meridian established in 1884 does not fall in the same place as our 0° latitude designation as determined by GPS/GNSS calculations.

This finding, however, is not the telling item within our adaptation of GPS data; it came when various agencies established the continuously operating reference system (CORS), composed of static GPS base stations. CORS stations, while used to help establish new survey positions in relation to a known reference location, also measure a continuous drift of latitude and longitude positions over time.

The National Geodetic Survey (NGS) is in the process of finalizing a new reference framework for establishing coordinate values that utilize time as a core component. Future implementation of the new National Spatial Reference System (NSRS) will require the additional attribute of time within the metadata of any new values.

The reality of ‘moving’ monuments

So how does this affect surveying and the monuments we surveyors hold on such a high pedestal? The answer varies depending on who one asks. Most surveyors will continue to hold the “priority of calls” as listed above. Several practitioners, however, want to move coordinates higher up the list because of technology, and the ability to retrace a published point because of the increase in technology and the higher accuracy and precision of today’s GNSS.

This is possible if the user of the technology follows the procedures as established by NGS with metadata and accurate timing, but there are still several variables in the setting and retracing methodologies. When was the last time the equipment was calibrated? Was adequate research performed to minimize environmental errors? Was there any interference due to solar storms or multipath? There are many potential issues a surveyor can face, but few are checking all the boxes when performing highly accurate and precise positional measurements.

Technology has brought surveying into the 21st century with GPS/GNSS and ever-increasing accuracy and precision. It should also be the profession’s goal that the technology does not override what the general public can see. They can see monuments, fence lines, buildings and other improvements, but they cannot see coordinates, which remain invisible to the naked eye. Technology may change that in the future, too, but until that time, we must rely on what we can see.

Coordinating surveyors on where we draw the lines