It can be easy to take GPS for granted as the average driver and smartphone user continues to enjoy convenience, entertainment and navigation from this technology, enhancing nearly every part of our daily lives. While we may not enjoy its benefits every day, one important use case keeps us and our environment safer: GPS has become a vital part of modern emergency response.

Many Americans across the nation are preparing for the impending hurricane season or the threat of other natural disasters, such as wildfires and earthquakes. GPS will play a critical role in recovery and response efforts. When natural disasters occur, accurate and actionable location information helps save lives and restore critical infrastructure as quickly as possible.

GPS has fundamentally improved access to information that can help the public prepare for these natural disasters, rather than waiting for them to strike. This information is more critical than ever. For example, California’s Oak fire spread to almost 20,000 acres and is part of a larger trend in California that has destroyed 14,700 buildings and killed 36 people over the past two years. Farther north, 530 wildfires in Alaska burned areas larger than the state of Connecticut in the state’s worst fire season in recent history. 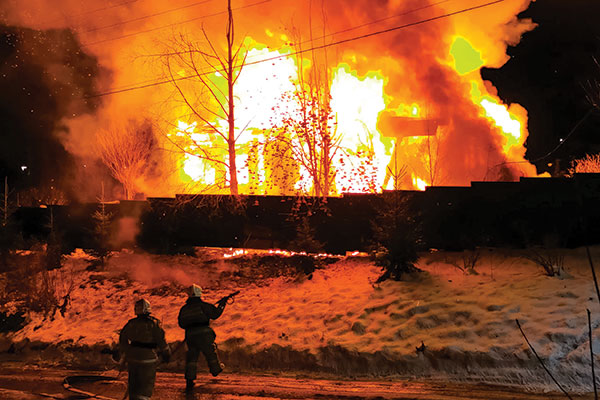 In addition to helping the public face natural disasters, GPS helps firefighters plan their operations more efficiently and enables them to receive real-time information on the location of the wildfires they are fighting. With real-time mapping, planning and operations, fire chiefs can respond immediately to areas where wildfires are dangerously advancing.

In turn, GPS protects our first responders by preventing firefighters from getting caught in unpredictable fires they would have otherwise not known were heading their way.

Firefighters use IGNIS drones to help prevent wildfires from starting or safely contain them with backburns. IGNIS relies on GPS for tracking, safety and control, which in turn helps firefighters avoid the dangers associated with being near prescribed burns. Without GPS, resources to help firefighters would not be deployed as efficiently — wildfires could spread even more quickly as a result, causing even more damage to our homes and infrastructure.

Beyond wildfires, GPS technology is critical to emergency response and weather safety. GPS data allow emergency responders to better locate callers and reduce the incidence of misrouting to outside jurisdictions. Using GPS data, a caller can be located in close proximity to his or her actual location. By reducing rates of misrouting and accurately pinpointing emergency locations, GPS helps reduce response time by taking away the need to reroute calls and search for callers’ locations.

In a recent experiment, NASA-commissioned researchers used GPS signals to better predict a hurricane’s maximum wind speed, which could help federal agencies and forecasters better predict the danger of hurricanes and provide more actionable information to determine whether to issue evacuation orders.

The GPS Innovation Alliance (GPSIA) is proud to support the role of GPS as a critical enabling technology for public safety, disaster response and relief efforts. With GPS, precise real-time location information is at the fingertips of both consumers and first responders from pre-disaster planning efforts to post-disaster recovery. While GPS has already fundamentally improved modern emergency response systems, GPSIA will continue to advocate for the continued growth of these lifesaving GPS-enabled technologies and applications through rigorously developed technical rules, interference protections, and a predictable spectrum environment.

Many of us have grown accustomed to the ease of GPS-enabled technologies, from smartphone to fitness trackers. At GPSIA, we’re also particularly proud of the role GPS plays in the many other life-saving ways the technology is being used and are committed to continuing this critical work.